A Kansan in the Kitchen 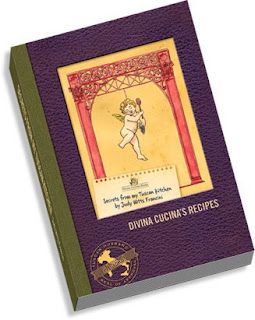 …..on and on and on! I can’t seem to control myself when I see a new cookbook. Some women have to have shoes, lots and lots of shoes. I have to have lots and lots of cookbooks!
Several weeks ago, Judy Witts Francini was here in the United States, making appearances to talk about her new cookbook. I, of course, NEEDED one immediately, and am I glad I bought one! It is such a delightful book! Judy actually had a font made of her own handwriting so it looks like she wrote each page by hand.
Judy has such incredible knowledge about the foods of Italy, particularly of Tuscany, where she lives with her husband, Andrea, in a small village outside of Florence. Judy was our guide while I was in Sicily, and my translator, since I don’t speak any Italian other than cookbook and menu Italian! You realize immediately when you meet Judy, she is full of energy and loves life in Italy!
Secrets from my Tuscan Kitchen has 93 of Judy’s favorite recipes, and she says they have her Italian Husband’s Seal of Approval! Judy learned how to be a good Italian cook from Andrea’s mother. She told Judy the secret of being a great Tuscan cook is to “Spend more time shopping and less time cooking.” By following these wonderful recipes, you can prepare simple food at home from quality local ingredients. Learn from Judy how to make the most of regional and seasonal produce. Learn to create great Tuscan dishes from the bounty of your countryside. Secrets from My Tuscan Kitchen shows you an insider's view of Italian cooking and a way of life that you can create in your home.
I, of course, could hardly wait to try some of the recipes. So far, I have prepared the Crostini di Fegatini (Chicken Liver Toasts) that I used some of my capers I carried home from Sicily! It was fabulous! And the Pesce Finto (Fake Fish) was fun! It calls for canned tuna, and I am a huge fan of Italian canned Tuna. Sure, it runs about $8.00 a can, but compared to American canned tuna…it is worth every dime! Big firm, healthy chunks of great tuna in good olive oil! I also used her recipe for Tonno e Fagioli (Tuna and White Bean Salad) last week for my Artist’s Picnic lunch at the vineyard. Delicious. 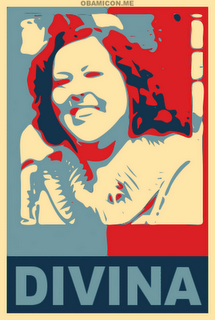 I was fascinated with her recipe for Meatloaf! In Italian it is called Polpettone. Her recipe is from the year 1519! Before tomatoes had arrived in Italy..It was delicious! I also loved her Involtini,(Beef Rolls). As part of our trip to Sicily, we participated in a hands on cooking demonstration that turned out to be our lunch. We prepared Involtini and they were good, but not as good as Judy’s.
I also brought home a few pounds of Almond flour from Sicily and was thrilled to find a recipe for Ricciarelli (Almond cookies) which I devoured all over Sicily. We even had them on our pillows at night when we would drag our tired bodies to our rooms! They are wonderful. Now, I am using my Almond flour.
Judy Witts Francini is a reader of my blog, as I am her’s, Over a Tuscan Stove. Go to http://divinacucina.blogspot.com/ I want to thank Judy for such a great addition to my collection. I should have gotten several, this one is going to have lots of food stains, olive oil, etc. all over it. This cookbook won't be in the bookcase in the office....it will be in my kitchen!

A few weeks ago I mentioned I had been approached by a large organization to teach a class on How to Write Your Family Cookbook. I could not see me teaching a class for 75 senior citizens. I'm too old for that! Not enough patience for that many people!

I spoke to Beck Pashia of ARTichokes in Mission Farms about the class and she said they would like for me to teach the class at the Gallery. I won't be available to teach until July or beyond due to my schedule at the vineyard, Art in the Vines, and traveling, but it is in the works! I think it will be great fun and an opportunity for people to gather up their mother's and grandmother's recipes and compile them in a book that can be left to their children and grandchildren. So many of us have baskets and boxes of recipes we have handwritten or clipped from magazines, etc. Now here is the chance to organize them. I think one of the most exciting things about this cookbook is printing your Mother's recipes written in her handwriting just as they are! Future generations will see their great great grandmother's own handwriting as well as eating foods she cooked!

I'll keep you informed of thew schedule for this class. In the meantime, go to http://www.artichokeskc.com/ and check out the class schedule for May. It has been posted along with a slide show of some of the work hanging at the gallery now. And don't forget Friday evenings at ARTichokes. Open studio for painting, sometimes there is live music, always nibbles furnished by the wonderful staff, and a glass of wine!

Since I went on about Italian Canned Tuna, here is a recipe using tuna. Hope you enjoy it. Remember, you can always find the Italian tuna at Whole Foods and Dean and Deluca

Melt the butter in a heavy saucepan, add the flour and stir over low heat for 1 to 2 minutes. Remove the pan from the heat and gradually add 1 ½ cups of the hot milk, beating vigorously after each addition. Return the pan to the heat and whisk for 1 to 2 minutes, until the sauce is very thick and smooth. Remove from heat.
Mix the drained tuna with about ½ cup of the warm white sauce in a bowl. Add salt and pepper to taste. Preheat oven to 350 degrees.
Gradually whisk the remaining milk into the rest of the sauce, then return to the heat and simmer, whisking constantly, until thickened. Add the grated Fontina and nutmeg, with salt and pepper to taste. Simmer a few more minutes, stirring frequently. Pour about 1/3 of the sauce into a baking dish and spread to corners.
Fill the uncooked cannelloni tubes with the tuna mixture, pushing it in with the handle of a spoon. Place the cannelloni in a single layer in the dish. Thin the remaining sauce with a little more milk if necessary, then pour it over the cannelloni. Sprinkle with Parmesan cheese, cover with foil and bake for 20 minutes. Remove foil and continue baking for 10 to 15 minutes, until golden. Serve hot, garnished with fresh herbs.
Posted by A Kansan in the Kitchen at 5:45 AM